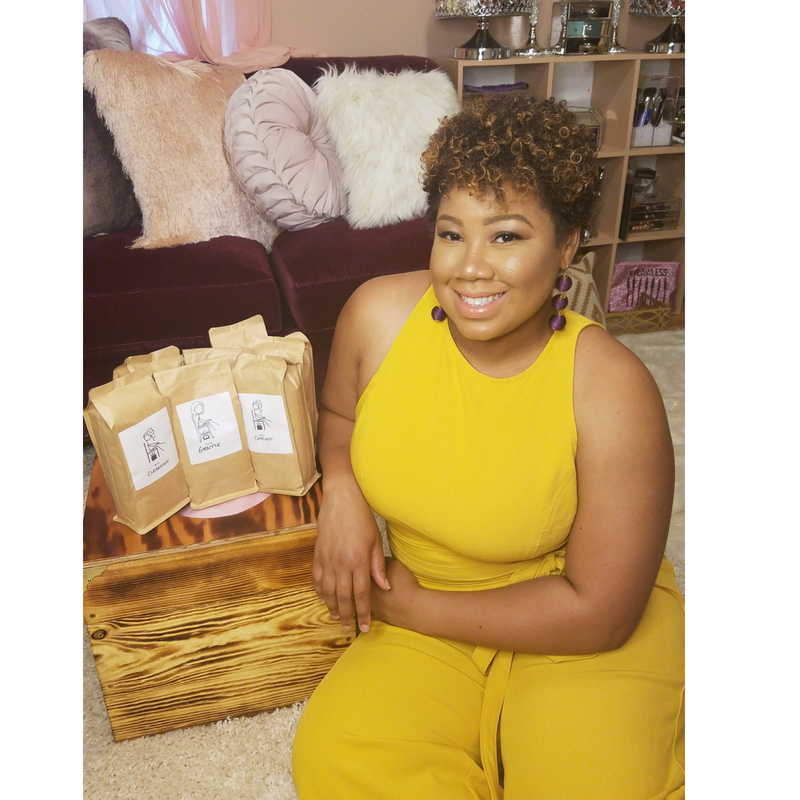 From a young age I was taught that one of the most natural miracles in my life, my period, was an inconvenience. It tended to interrupt my daily life and before I was thinking about children, I felt as though I was better off without it. That’s how I felt until I was 29 years old sweeping my vaginal health under the rug like a mystery. I ignored pings and pains and would have never known the color of my blood or severity of pain could be trying to tell me something about the state of my body.

When I was 25, I began fearing the pain and heaviness of my period. Whenever I spoke with my doctors about it, they would tell me, “Oh, that’s normal. Take some ibuprofen for the pain and you’ll be fine. It also may be stress so try not to stress too much.” One of my doctors told me that I was only bleeding 3 tbsp. and that it wasn’t as much blood as I thought. Believing that my doctor was always right, it made me feel like I must have been crazy. Four years later I had an episode where I wouldn’t stop bleeding--much more than 3 tbsp--and the pain was so bad that I couldn’t move my legs. That’s when things got real.

I knew that something was wrong so I began calling numerous doctors to get an appointment. They all told me that they didn’t have any available appointments for non-emergency situations. I’d been hemorrhaging for 3 weeks, in unspeakable pain so how was that not an emergency!? After five weeks of this, I was finally able to see a doctor and she prescribed the birth control pill. (I had “the patch” when I was in college but I swore it off because I didn’t like the side effects it was giving me and I wanted to lessen the chance of fertility issues in the future. When I asked about the side effects, I got the typical run down as I did in high school and college.) She mentioned blood clots and that the risk was so rare that I shouldn’t have anything to worry about since I am relatively healthy. She added that I don’t have a history of blood clots in my family so I should be fine. Birth control was apparently my only option so I took it. It didn’t immediately stop the bleeding. In a follow up appointment, I told the doctor and she said, “If you don’t stop bleeding I may have to send you to the E.R.” I was shocked she’s a trained gynecologist and she didn’t know what else to do? But I trusted her knowledge, changed to Camerese where I would get a period every 3 months and in a few days the bleeding and pain stopped. I tried to stop taking it four months later but once again, the bleeding wouldn’t stop, so I continued the regiment.

Out-of-the-blue, my left leg began to swell up January 2015. I thought I sprained my ankle but the pain became unbearable and my leg was extremely swollen. I went to the doctor and blurted out, “I think I have a blood clot in leg from my birth control”. I don’t know why. I felt crazy saying it because I was told that it could never happen. Unsurprisingly, that’s exactly what the doctor said. He did a d-dimer on it just in case and said that he’d send me to the emergency room if it came back positive. Well, it did and when I was in the E.R., I was told that they couldn’t really tell the difference between my two legs since I had big calves. They didn’t find anything in my ultrasound and diagnosed me with a sprained ACL which they prescribed pain medication for and sent me home. By this time, I could only get around in a wheelchair.

Almost a year to the day that I started taking Camerese, I passed out and actually died on my apartment floor. I was having sudden chest pains so I thought it was an asthma attack but it was much worse. I even tried to play off the pain so that my husband wouldn’t be scared. By the time I could tell him how bad it was, I passed out and he caught me before I hit the floor. I remember hearing a woman’s voice say to me softly, “It’s ok Marchelle. You’re just going to sleep here for a little while, ok?” Then I heard a man’s voice say, “It is not your time yet. Go back.” Everything was white, then it became black. Everything was silent. I could hear the Duke game playing in the background but I couldn’t move. I felt water drops fall between my eyes and forehead, I could see again. I saw the sweat across my husband’s face and heard his frantic voice. I tried to stand up but was met with crushing pain and I couldn’t support myself. I told him to call an ambulance because I couldn’t make it to the car. Twelve minutes went by before the ambulance arrived. They kept my husband calm. I remember the second EMT was annoyed that I couldn't fully talk and answer his questions. He didn’t think I was as sick as I was. He clearly wanted to take me off his ambulance right then and there. I had to convince him that what I experienced wasn’t normal and that I didn’t pass out for no reason.

When I arrived in the E.R., they did a intravenous contrast MRI and that is when they found 5 blood clots. There were three in my left leg and two acute clots in each lung. I was right all along. I ended up with Deep Vein Thrombosis, Pulmonary Embolisms, Pulmonary Hypertension, and Diastolic Heart failure from Camerese. The birth control was only a Band-Aid for my issue and it never healed it. It actually made it worse.

I spent a few days in the ICU. Once I got home I didn’t have any guidance other than how to take my medication. Pain meds, blood thinners, benzodiazepine meds. I was angry but I was educated. I wasn’t going to be silenced anymore and I decided that if my doctors weren’t going to listen to me, I’d find one who did. I started trusting my intuition, which was an act of self love, since it was clear that I knew more about my body than the doctors I had been seeing.

Many gynecologists suggested putting me back on the very thing that almost killed me: birth control. I had just had 5 blood clots 3 months ago and they wanted to put me on something that would increase my chances of getting another one!? Right. One wanted me to take Lupron, which would shut down my hormones and make my body go into early menopause. Another suggested that I should immediately get pregnant to reset my hormones. Someone even suggested that I have a hysterectomy. During this time I developed a large 8 cm fibroid just about the size of an orange and got a myomectomy to remove it. The surgeon, who was also my first GYN, luckily didn’t shame me but actually listened to me. He was the first to prescribe a pain medication strong enough to help me walk during my periods because at that point I would pass out multiple times a day from the pain. The predicted six-week recovery unfortunately turned into six months.

One year later, I exceeded my rounds of blood thinners and was taken off of them. However, a few days later, I started hemorrhaging. It was worse than I had ever seen before. My doctors continued to push me to have a hysterectomy. One hematologist would suggest it during every single appointment. I found this so disheartening and unfair. She was married with children. I’m married but never had children. There was still a chance for me to have children but it didn’t seem as if she cared. I began to think that I was going to just bleed for the rest of my life.

My breaking point was when I hit 75 days of hemorrhaging. I went to the E.R. twice for complications from anemia because I was losing too much blood. I desperately started looking for a solution. I looked up "vaginal steaming" -- something I remember hearing about -- and I found a company Steamy Chick that provided supplies and treatment plans. Upon watching the documentary Demystifying the V-Steam my mind was blown and freed at the same time. I immediately scheduled a consultation with the owner Keli Garza.

It was weird to speak openly about my period in such a casual manner without being shamed and with a person who didn’t think I was weird and didn’t shun me. Keli's company was a one-stop shop for everything I needed to start this new natural regiment. This was a relief because I would usually have to see 2-3 doctors and locations for my issues. I was able to get the herbs, a steaming regiment, steamer and consultation all from Keli and the resident acupuncturist she works with -- Kris Gonzalez. She suggested I steam, try acupuncture, and consulted with Kris on taking the Chinese herb called Yunnan Baiyao (which was a welcome replacement for what the doctors were ineffectively trying to do with the Tranexamic Acid to slow down the excessive bleeding). It was a God-send! There was a peace that filled my body knowing that help was here. I was finally getting rescued.

I started the Steamy Chick regiment in June and within 3 months my symptoms had turned around. The acupuncture helped me to release past tension, anxiety, and helped my meridians open and flow again- which is important because your uterus can hold stress and traumatic events and it helps to prevent blood clotting. I eliminated dairy, lowered my salt, sugar and processed oil intake. My cycle days went from 42, 38, 36, to 32 cycle days. The bloating between cycles went down. I went from 3 doses of a Tramadol/Tylenol daily cocktail for a week, to 2 doses a week, and now none. I was no longer bedridden for two weeks during my period. The color of my blood has been a healthy fresh red color for multiple months. The pain and swelling goes away within 7 days. I no longer have cramps to the point of not being able to walk. After being with Steamy Chick for a year, I no longer pass out from pain and the hemorrhaging has not come back. I am still working on shortening my bleeding days down to 4--something Keli believes is possible but, for now, I’ll take 7 over 75, 52, and 10 days any day. Progression is progression. I am able to say that without dangerous side effects and risking my life with synthetic meds day after day.

I hope the take away readers get from this is to raise the volume on your voice. Let yourself be heard and not swept under the rug by doctors. Don’t let yourself be another patient number. You can educate yourself to understand your condition just as much as the doctors and nurses. You are the one who experiences the pain, tests, and life interruptions, not other people. Don’t give up until you have an answer that works for you. Not someone else’s prognosis.