When I was pregnant with my first child I decided to plan for a postpartum resting month. I had learned of the idea a couple years earlier when my sister was pregnant. I wanted to buy her a book and at the bookstore found a copy of Sitting Moon: A Guide to PostpartumRecovery by Jessica Chen.

In Chen's book, she shares the Taiwanese tradition after giving birth. For one month the mother is to maintain bed rest and eat special meals to recover her body from pregnancy and childbirth. Essentially, it is a time of bonding and resting for the mother and baby which allows the milk to come in and the body to heal. Sexological Bodyworker Kimberly Johnson explains the significance of the postpartum period: "The first 30 days postpartum is so powerful that you can either heal a lifelong illness or create one." 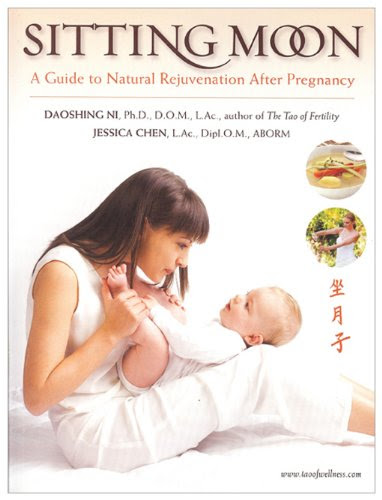 Completely convinced that I wanted a 30-Day Postpartum resting time, I started to plan out the details from the very beginning of my pregnancy.

Here are the steps I took to prepare.

2. I invited my mother-in-law to come and stay with us to help with cooking and cleaning. (Luckily she had hinted that she would like to and so I felt comfortable with the invite.)

3. I bought some shapewear undergarments and a belly wrap (to help the skin to quickly shrink back without losing it's elasticity).

4. I set up a vaginal steam chair.

A little back story on the whole vaginal steaming thing. It was something I had done for a couple of years at the conclusion of my period and, as relieving as it was, I figured it would be great after giving birth. To make sure it would be safe I went to the women in my private Facebook pregnancy support group and asked if anyone had heard of it for postpartum use. Two women responded--one from Ghana and the other from Haiti.

The Ghanaian woman said that after giving birth a medicine man came over and prepared herbs and showed her husband how to support her as she squatted over the herbal steam. They continued this protocol for 30 days as is custom in Ghana.

The Haitian woman said that after she gave birth her sister and midwife prepared herbs for her. They had her drink the herbs, bathe in them and then squat over them for a vaginal steam. She could not remember how often she did it but said it was several times.

Since I was dedicated to a month long postpartum plan I decided to follow the African tradition and steam 30 days straight. In preparation, I re-purposed a decorative chair and added a burner and pot below it. I placed this make-shift steamer near my bed.

On February 19th after 12 hours of labor I gave birth at home to a beautiful baby girl weighing 9lbs 12 ounces. When she was born I felt two things that I never had before: 1) a love beyond words for this little being; 2) soreness and deformity of my whole vaginal area like I didn't know was possible.

First of all, I still looked pregnant.

Second, my pelvic floor was so swollen that my body parts were completely unidentifiable.

My uterus and colon were both falling out (which I didn't even know could happen).

I was bleeding (postpartum bleeding is called lochia and is normal) and, not exaggerating, I think my coccyx was broken (because I couldn't sit on it for over a year and I've since learned that is not normal.)

I was very uncomfortable (to say the least). I couldn't ever imagine my body healing.

Nevertheless, I went ahead with the plan--I started eating my special herbal soups, wrapped my belly and hung out in bed.

The meals helped my breast milk to come in right away and gave me energy. (Note: for anyone planning to breastfeed please make sure to get a postpartum meal plan. Oriental medicine has the science of postpartum cuisine down and you won't ever have to worry about your milk supply.)

After a couple days I did the first vaginal steam. The second I sat over the warm herbal steam I felt the most relief that I've ever felt in my lifetime. It felt like absolute bliss. I wanted to sit there indefinitely, forever.

After that first steam, I noticed several things. Number one, I felt so much more comfortable. The swollen skin had retracted quite a bit during the steam session so sitting and going to the bathroom felt much more normal. Secondly, the lochia was much lighter the rest of that day and my postpartum contractions were gone (even while breastfeeding which is when I was noticing them the most).

The next day I prepared the steam session for the second time. Again amazing. After the second steam, my colon completely resided and the hemorrhoids were gone. My pelvic floor felt like things were getting back into place, the lochia was now very light and my stomach skin was notably smaller.

One thing seemed very clear to me. Steaming was quickly fast-forwarding my healing process. By the end of the first week my lochia was entirely gone. By the end of the second week, I was starting to see my stomach again. And after one month.....

I was back. My body was completely healed and looked like it had pre-pregnancy. I'd lost all the weight, my stomach muscles were visible, my organs and skin were all back where they were supposed to be and my vagina was tight as it had ever been. No one could tell by looking at me that I had just had a baby (except for, of course, I had a cute little baby).